From Memory to Mind Uploading

From Memory to Mind Uploading 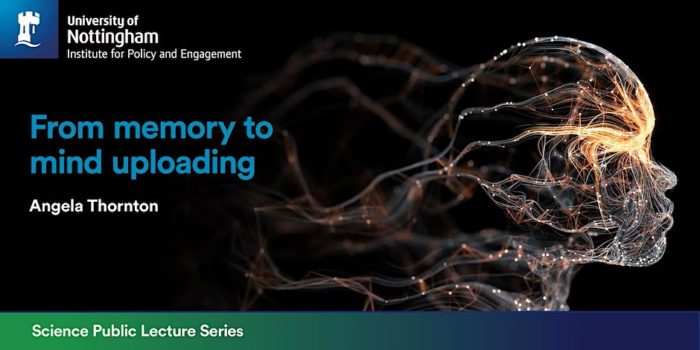 Angela Thornton explores a hypothetical futuristic world where brains can be emulated, augmented and uploaded.

On 15th December, fourth-year PhD candidate Angela Thornton gave a public talk titled “From Memory to Mind Uploading” via the University of Nottingham Institute for Policy and Engagement. In this talk, Angela shared her PhD journey which uses innovative tools and techniques to explore a hypothetical futuristic world.

In this scenario we can create an artificial brain (via whole brain emulation) and potentially augment or even upload our brains and minds to a different platform such as a supercomputer. While mind uploading has been widely depicted in popular media such as Black Mirror (Brooker, Jones & Reisz, 2011-2019) and Amazon’s Upload (Daniels & Klein, 2020 -), scientific and technological innovations such as mapping neuronal connections, high resolution imaging and growth in nanoscience and computing, as well as advances in neuro prosthetics and Brain: Computer Interfaces (BCI), means that it may become a reality in the far future.