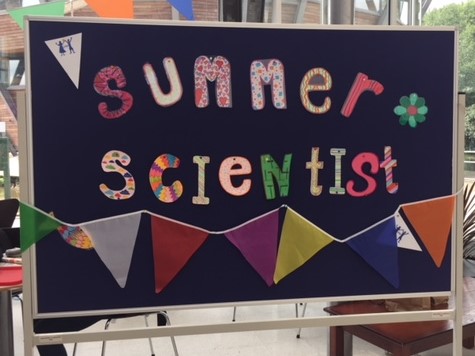 Each year children and parents are invited to visit the University and play lots of free and fun games that help us with research. This past summer, Wendy Olphert (2015 cohort) enjoyed assisting in one of the activities at Summer Scientist 2018:

A bit of brainwave! –Wendy Olphert

I’m researching the role that digital technologies (such as mobile phones and the internet) play in the lives of people with a brain tumour – whether their symptoms create challenges for technology use, and whether using technologies can contribute to improving their quality of life.

At one level, this is quite an easy idea to communicate to people outside of an academic context – we readily understand that if we have a problem with our brain it could affect our ability to think or act – but to appreciate the range of impacts that a brain tumour could have on an individual’s life requires an awareness of what our brains do and how they work.  The brain is such a complex organ that scientists are still researching these questions.  But we already know a lot, and as I recently found out, even for young children it can be fun as well as instructive to learn about how brains work!

Over the summer I had a chance to assist in an event called Summer Scientist 2018.

This is a week-long programme run by the School of Psychology at the University of Nottingham in the school vacation that has now run for several years.  Families are invited to bring their children (aged 4-11) to spend half a day at the University to play lots of free fun games and optionally to take part in some research activities – that were also designed to be fun and engaging. By taking part, children (and parents) get to learn about how the mind and brain work by experiencing real science first-hand.

I was given responsibility for an activity on the theme of electroencephalography – how dull does that sound for young kids?!  But the organisers had found a clever and entertaining way to demonstrate the fact that the brain generates electrical impulses, using a special headset with a pair of furry (fake!) cat’s ears attached (see: https://en.wikipedia.org/wiki/Neurowear). The headset picks up electrical activity from the brain which in turn moves the ears depending on your state of mind. When you are relaxed, the ears droop; when you are interested, the ears are alert – and when you are ‘in the zone’ the ears wiggle.  The kids had free choice over the activities they chose to take part in, and most were fascinated by the wiggly ‘cats ears’ and keen to try them out for themselves.

The children attending had a free choice over the activities they opted to do, and during the course of the two sessions in the day around 40 children of different ages came to the stand to try out the ears and, by doing so, learned about electrical impulses in the brain.  There was a mirror to look in; once I’d attached their headset, some found out that the more they giggled at their reflection the more the ears wiggled (and the more the ears wiggled, the more they laughed!) Others, especially one little boy of about 6, spent many minutes silently trying out different ‘brain activities’ such as thinking about exciting times such as parties, being calm, or trying to count backwards from 20, and clearly being intrigued to see the effects of his ‘brainwaves’ on the ears’ movement. 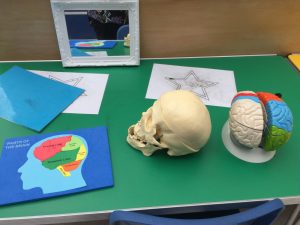 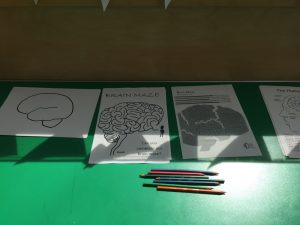 For the older children, and in some cases their parents, I explained how scientists can use the electrical impulses in the brain to find out more about how it works and what is happening when the brain is not working as it should – and that in turn gave me a chance to tell some of them about the research that I am doing.

I really enjoyed the day and it was clear that the kids had a great time too, as well as picking up lots of science along the way.  I felt that the whole concept of ‘Summer Scientist’ week really was a bit of a brainwave!