The EPSRC Horizon Centre for Doctoral Training in My Life in Data held an Industry Day on Friday 30 September for it’s collaborating partner organisations at the Jubilee Conference Centre at the University of Nottingham. 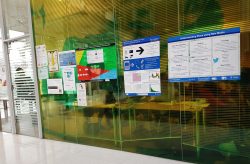 Some of the Horizon CDT posters on display

CDT Co-Director, Professor Sarah Sharples, provided an update to audience on the successes and the outputs of the Centre so far, since the first cohort joined in Autumn 2009. There were also informative presentations from three CDT students from the 2014 cohort on the progress they have made with their doctoral research so far, all of whom have the support of at least one partner organisation.

Finally, before lunch, CDT stakeholders had the chance to discuss and provide feedback on the value and importance of CDT research to their organisations and departments, and how the CDT has already and can potentially provide research impact in the future within the digital economy.

An Advisory Board meeting was held immediately after lunch for the CDT’s Board Members.

Posters were also produced and exhibited from CDT students from cohorts 2013-2016, giving attendees a flavour of the interdisciplinary research that is currently taking place within the Centre.