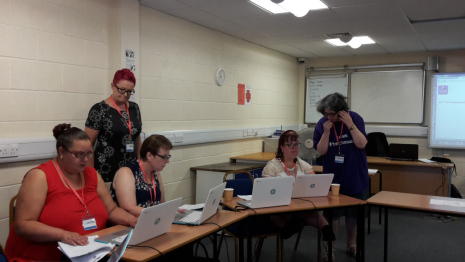 It was a great pleasure to join Dr Sue Black OBE, the #techmums and #techmums trainer of Top Valley Academy for their last module before the completion of the #techmums programme here in Nottingham. Sue is the founder of the initiative that is aimed at empowering women by teaching them a variety of tech skills, in the process helping them to feel more confident and supporting the mums who use the newly acquired skills to pursue a career in education, entrepreneurship and IT.

The former tech-novices turned #techmums officially after the last module on the basics of computer programming in the programming language Python. The concept of writing code may seem daunting, but with Sue’s hands on approach and great, real-life examples, everyone got coding pretty quickly. It was great to see that the #techmums had fun, were creative and some even showed a real knack for debugging code, a skill that is invaluable for any programmer.

At the end of the last module Sue recapped what they had covered in the last three weeks and it was quite the impressive list including (services in) the cloud, app design, web design, social media, online security and coding. 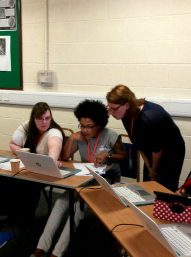 The day continued with a celebratory lunch at The University of Nottingham and a tour of the Mixed Reality Lab, where the #techmums and their kids had a go at the Virtual Reality swing built by a team of researchers in the lab.

The final event of the day was the graduation ceremony which was held outside in the sunshine. For the ceremony the #techmums were joined by Lilian Greenwood MP, who congratulated the #techmums on their fantastic achievement, and Kelly-Ann Vere from Engineering. Kelly-Ann spoke about her experiences of starting out as a technician and her transition into a doctorate, through becoming a senior technician and techmum herself. Her main words of wisdom included that it’s ok to be scared and then go and do the thing you’re scared of anyway. She emphasised the importance of taking the educational opportunities that present themselves along the way and embrace the concept of life-long learning.

Congratulations to the #techmums in Nottingham and good luck for the future!!!